Charts show time series data for collected metrics. You can zoom in to a particular time period, change the chart’s granularity (the number of series and density of points), breakdown by dimensions (hosts, users, and so on) to chart only those that you’re interested in, and filter the dimensions to selectively hide/show them.

To display the Charts page, use the left-nav menu, and select Charts. 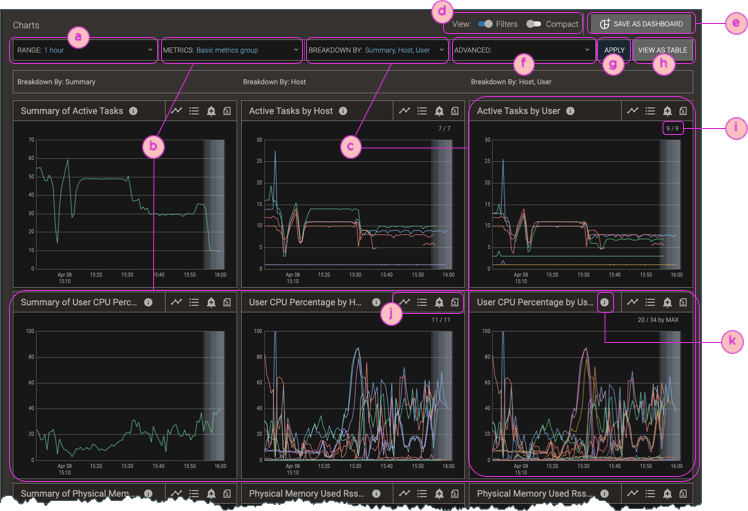 Zoom the Time in Chart Displays

You can zoom in on interesting time periods in charts, for example, to see more detail where there’s a spike or where there are many series members. When you zoom the time in one chart, the display refreshes to show the same zoomed time in all the charts.

By default, charts show breakdowns for dimensions with the max or min values (according to metric), which highlights the primary contributors. Tables (except the Custom Table) are shown for the dimension breakdown that corresponds to the table’s purpose; for example, broken down by user in the Users Overview. However, it’s often helpful to drill down to specific series of interest by selecting additional breakdowns or by filtering for any breakdown.

For example, after viewing all hosts’ contributions to resource usage of some kind, you might want to focus on particular hosts. You can filter the breakdowns by showing series that match specific names/IDs, that match a regular expression (a regex), or that match an advanced breakdown filter query for status data or a specific metric-value combination.

For detailed information about using the Breakdown By filter (callout ⓒ in the Charts Interface screenshot), see Filter the Charts & Tables by Dimensions: Hosts, Users, Etc..

Hide and Show Series in a Chart with the Legend Filter

Charts typically show so many series for each breakdown (the selections in the filter bar for Breakdown/Filter By, such as hosts and users) that it can be hard to determine which color’s line graph corresponds to a given series. To reduce the number of series on the display, use the Show or hide legend control (list) to show the chart’s legend. From the legend pane, you can then hide or show any given series in the chart.

It’s a common scenario that you’ll want to look at charts that are logically related but that have different metrics (chart rows) or series (chart columns). Starting with a given chart and drilling down to its details, or selecting a chart and viewing another chart based on the what you find in the first chart, can be a time-consuming process that becomes frustrating if you’re repeatedly making the same selections and drilldowns. You can eliminate this repetitive process by creating custom dashboards—combinations of charts that you create for any number of any metrics-series data that you want to see.

The Advanced chart options filter bar is available on the Charts page. With it you can change the number of series (and which ones) to show in charts, balance series trends vs. data accuracy, show/hide the average of all series, and show/hide the maximum and average values of the series that are not shown. 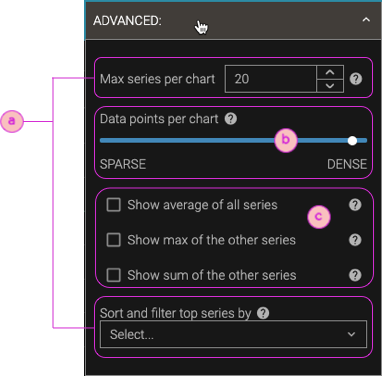 Change Number of Series to Show in a Chart

The series counts are shown in all charts except Summary charts. The counts are displayed as an x/y fraction in the chart’s upper-right corner.

By default, charts show up to a maximum of 20 series. This default limit:

Depending on the chart’s metric, the chart might show three fewer series than the 20 you would expect, such as “17/908 by MAX”. This happens because when there are more series than the current maximum number to show, the remaining series are aggregated into average, max, and sum values to provide an overall picture of the activity in the selected timeframe. Show the chart’s legend to hide and show the aggregate series, average_of_all_matched_series, max_of_the_others, and sum_of_the_others aggregate.

You can change the maximum number of series shown per chart (the numerator in the x/y fraction in a chart’s upper-right corner). Showing more series gives you a more complete picture, but showing fewer series highlights the edge cases.

Show the Sum of the Others

Show the Average of All Series

Charts typically show an average_of_all_matched_series series only when there are more series matched (to the current filter settings for time range and breakdown filters) than the current maximum number to show. However, you can show this series any time; use the Advanced Chart Options filter to do so.

By default, charts are configured to show the most accurate series peak values by including the highest number of data points. But if there is a lot of noise in a chart’s data—data points that frequently go up and down—it can be difficult to see the overall trend of the data. This is especially true when there are many series on a chart: if they’re all noisy, it’s hard to see the signal through the noise. By reducing the number of data points, which smooths the series by down sampling and averaging the points together, it’s much easier to focus on series trends.