Memory Swapping Detection and Mitigation in the Pepperdata Supervisor (RPM/DEB)

Swapping is a memory management technique that computer operating systems (OSes) use to ensure that RAM is maximally used on processes that need it. During swapping, the OS moves processes between virtual memory on disk and physical RAM. Swapping is a normal, expected part of operation, but it can be a problem when there are too many processes scheduled to run at once.

When the OS spends too much time loading and unloading pages from disk onto memory—referred to as thrashing—the computer’s performance degrades, at best, and at worst the computer can become inoperable. In a distributed computing environment such as Hadoop, if even just a single machine slows down due to excessive swapping, it can negatively affect jobs across the entire cluster. Therefore, it’s imperative that cluster operators be able to quickly identify hosts that are excessively swapping, and take mitigating actions such as killing jobs to reduce both swapping and overall load on the host.

The Pepperdata Supervisor employs a machine learning (ML) algorithm that continuously monitors metrics such as pages of memory being swapped in and out of physical RAM, and detects when there is excessive swapping on any host in the cluster. The Swap State metric (metric code-name, n_sdss) keeps track of the level of swapping on each host.

The table describes the values the Swap State metric can take.

To further explain how Pepperdata performs automatic detection and response, let’s examine a single host on a medium-size production cluster (~100 hosts) running thousands of tasks. Pepperdata Supervisor monitors the Swap State of each host in the cluster, evaluating the number of pages swapped in and out (see the Vm Stat Pages Swapped in by Host and Vm Stat Pages Swapped Out by Host charts, below), and takes action on a per-host basis in near real time to prevent thrashing. 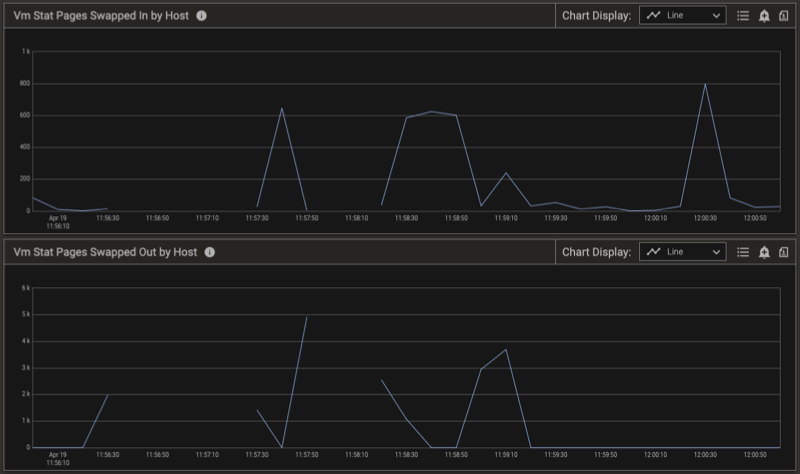 The Swap State changes from 0 (Normal) to 2 (Extreme) when the relative number of pages swapped out and in indicates extreme swapping on this host. To prevent thrashing on the host, Pepperdata Supervisor steps in, and in conjunction with YARN starts killing tasks to return the swapping to a normal level. This is shown in the charts by the Swap State returning to 0. You can confirm the results by observing the free memory available on the host. (See the Swap State by Host chart, below.)

To re-enable the controls, remove the property or change its value to true, and run the refresh command again.

You can verify that swap detection and response are working as expected by viewing the applicable charts.